A closer relationship between science and society is today considered to be a necessary premise for economic development and social well-being in general. There is widespread discontent regarding the poor dialogue between research and the productive world, between experts and citizens.

Research and innovation, however, risk losing a real chance for impact and enrichment without tangible interaction with different areas of creativity and practical experience.

This consideration underlies the European network Science & the City, coordinated by the city of Barcelona, which was set up to develop a kind of public involvement on science themes that is not general and abstract but strongly rooted in Europe’s various local and territorial sensibilities. In other words taking science culture out of traditional museum containers and bringing it alive in the urban and extra-urban fabric.

In Italy the challenge has been taken up by Observa -Science in Society, a centre dedicated to the relationships between science and society. With the event Scienza e Società si incontrano nell’Architettura (“Science and Society meet in Architecture”) the Italian member of the network has sparked public debate about research and innovation on a subject strongly characterised by identity and tradition: architecture. 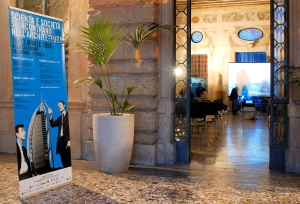 The villas and buildings for which Italy is famous around the world are, apart from anything else, tangible proof of the meeting of science, technology, society and culture. If we could slice through these great architectural works we would find the indelible imprint of the values, ambitions and technical-scienti. c knowledge of the era in which they were designed.

It is above all in architecture, for example, that our relationship with space, light and time is consumed on a daily basis, the not always easy encounter between skills and practical needs.

The second edition of the event, taking place from April 10 to 13, 2008, at the Palladian Villa Caldogno, once again featured a dialogue based on a series of key words, between the public and scientist, philosophers, architects, writers, anthropologists and cartoonists.

The event opened with Giulio Giorello and Alfredo Castelli (creator of Martin Mystère) discussing Truth, followed on Friday April 11 by Gene Gnocchi and the evolution expert Telmo Pievani on Creativity and Intelligence;

There was also Teatro Scienza’s theatrical show Nanometamorfosi (April 10), cinema with the Film Sketches of Frank Gehry introduced by Domus’s editor Flavio Albanese, and a voyage into the Architecture of Taste in the company of Dario Loison and Fausto Maculan.

In the Barchesse at the villa, an exhibition of student work was set up: science and architecture as seen by the young.

A brochure with the detailed programme can be downloaded here

Observa is a member of the European network of ‘city of sciences’ ESCITY supported by the European Commission and coordinated by the city of Barcellona, which includes also the cities of Vienna, Lisbon and Tromso.

Yearbook Science Technology and Society 2020
February 26, 2020
Watch video about the PERSIST ScienceCamp
February 25, 2020
Post-doc fellowship University of São Paulo Brasil
February 25, 2020
Follow Us
Keep in touch. Subscribe to our Newsletter to read about all our News and Events.